The Provincial Choir of Hubei in concert June 23, 2015

The Provincial Choir of Hubei, coming under the Opera of Hubei Province, was founded in 1952 and has since won any number of prizes and awards nationwide. For around sixty years, the choir has composed and performed pieces from Chinese opera such as Hong Hu Chi Wei Dui (Red Guards on Honghu Lake), the Sakura, Canon in April, Ba Yue Gui Hua Bian Di Kai (Osmanthus Flowers Blooming Everywhere in August, created in 2014). The Hong Hu Chi Wei Dui opera has since become reputed as one of the great Chinese classics of the 20th century.
In recent years, the choir has created new pieces by collaborating with foreign artistes and has given concerts in Hong Kong, Macao and in a number of European countries. The Provincial Choir of Hubei is devoted to pursuing its glorious history and enhancing the performing arts with its magical artistry. 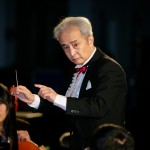 Born in 1938 in Wuhan and now the director of the Provincial Choir of Hubei. Over an artistic career spanning some fifty years, Wang Xiufeng has directed over 30 operas, including more than 400 scenes from Hong Hu Chi Wei Dui and over 200 scenes from Jiang Jie. He has also conducted « The Romance », a violin concerto by Liang Shanbo and Zhu Yingtai and Tchaikovsky’s violin concerto in D major, and directed dance dramas, symphonies, the modern Beijing opera, the operas of Han, Chu and Huangmei, among others. He is also a composer of opera, symphonic suites, concertos and solos.

The Provincial Choir of Hubei will be performing: