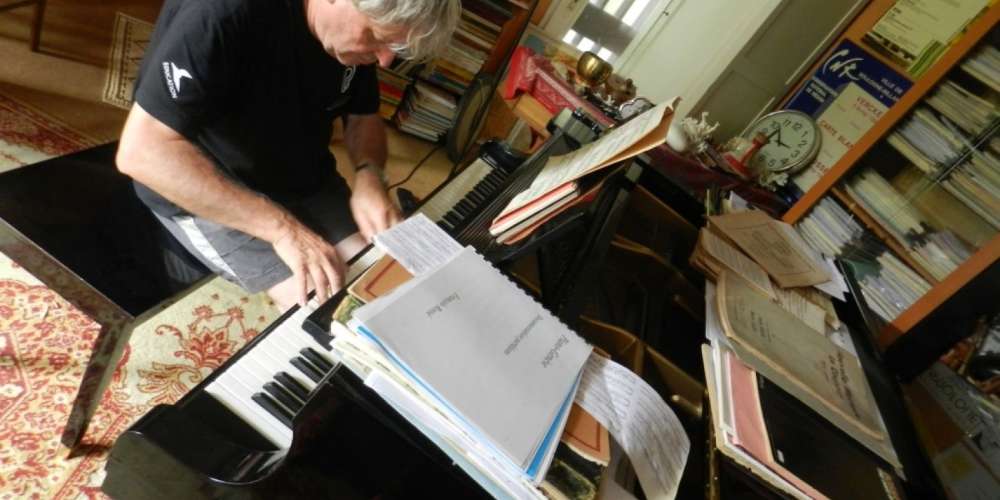 François Rossé firstly studied the piano, then moved on to musical analysis and composition. He was one of the last students of Olivier Messiaen. Appointed Professor of Musical Analysis at the Bordeaux CNR Academy in 1974, he met Jean-Marie Londeix, who prompted him to write for the saxophone using the new techniques developed for this instrument. He quickly extended his exploration to all the other instruments of an orchestra, even to the most incongruous and most unlikely.

The winner of several international composition prizes (including the Prix National de la SACEM 1994 for all his work),  François Rossé was promoted to the rank of Chevalier in the Ordre des Arts et des Lettres, a distinction he likes to compare tongue-in-cheek with that of « Maistre Dégustateur d’Aligot » (« Master Potato Cheese Taster! ») awarded that same year (1991) by the « Amicale des Cantalès et des Buronniers des Monts d’Aubrac ». These are just two significant facets of a colourful character, a man of science and craft, an unashamed epicurean enjoying the pleasures of the mind and body, who to date has composed some 400 Opus numbers.

As an accomplished improvisor, he has worked with recognized French musicians such as Beñat Achiary, Denis Badault, Bernard Lubat, Jean-Marc Padovani, Carlo Rizzo, Sylvain Kassap, Jean-Pierre Robert, Gérard Siracusa and Michel Etxekopar, and storytellers like René Martinez. François Rossé is also the author of many lyrical and theory texts in French and in German, and is one of the co-founders of the ICAR Group (Aquitaine Performers and Composers for Research).